From being one of the oldest single-tool manufacturers to still dominating the competition, Dewalt has experienced it all. Furthermore, they continue to craft the most optimized and professional tools. That’s why the DW715 miter saw isn’t anything unusual, because they did a splendid job when designing it. After all, “You buy a machine and what you really get is satisfaction, entire satisfaction”- Raymond Dewalt.

Having this wonderful miter saw at your disposal makes advanced carpentry look like a piece of cake. In addition, its stainless steel miter plate and miter cam lock provide unmatched cutting accuracy. Thus, we have decided to review the DeWalt DW715 to determine whether it’s really worth investing your money in. Hence, without further ado, let’s find out what makes this miter saw famous.

There’s probably a huge load of key features, which makes the DeWalt DW15 a professional and efficient tool, including:

In order to make sure the DeWalt DW715 is perfect for you, we’ve compared it with the Hitachi C10FCE2. That’s because this alternative miter saw has features that go head to head with the Dewalt DW715. Hence, before you conclude, we suggest checking out this comparison table. 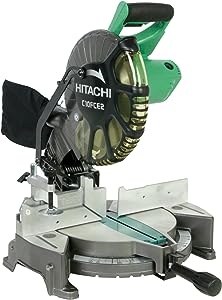 Product
Product
DeWalt DW715 Single-Bevel Compound Miter Saw
Hitachi C10FCE2 Single-BevelCompound Miter Saw
Speed
Speed
Dewalt DW715 consists of a 15 amps powerful motor that runs the tool at 4000 RPM
Hitachi C10FCE2 also comes with a 15 amps motor. However, it powers the machine at 5000 RPM
Blade’s Diameter
Blade’s Diameter
The stainless steel blade’s diameter is 12 inches
This one’s blade’s diameter is 10 inches, falling a little behind the DW715
Miter Range
Miter Range
DW715 offers a miter range of 0°-50° on both sides, making it versatile
When it comes to the C10FCE2, the miter capacity ranges from 0°-52° on either side. This makes it more flexible.
Bevel Range
Bevel Range
Dewalt designed a bevel range of 0°-48° to the left side and 0°-3° to the right. This increases its capacity
Unfortunately, Hitachi couldn’t stay on par with them. The bevel angle ranges from 0°-45° to the left only.
Portability
Portability
It comes with built-in handles for portability and weight only 42lbs, making it lightweight
Although the Hitachi miter saw doesn’t have built-in handles, it’s much lighter than the DW715, weighing only 33.5lbs
Fence Size
Fence Size
This one has a tall fence, which is capable of supporting 5-¼” vertically nested crown molding.
It consists of a large, elongated, and flippable fence, which can rise up to 4” during vertical cutting of crown-molding
Check Price On Amazon
Check Price On Amazon

To begin with, the DeWalt DW715 comes with an easily adjustable stainless steel miter detent plate. It also has 11 positive stops, making the unit highly reliable and precise when cutting. Furthermore, the 15-amp motor spins at a no-load speed of 4000 RPM, powering its 12-inch blade! Hence, we can confidently claim that this machine is capable of and ready for many applications of cross-cutting and miter cutting.

However, this isn’t the only thrilling aspect of this fantastic device. The finely designed nature is one of the key reasons it’s such a versatile miter saw. The DW715 has an adjustable cam-lock miter handle, which is capable of setting the machine at an accurate miter degree quickly. On the other hand, it also lets you tune the miter settings without letting the saw skidding into the detent plates.

Lastly, it comprises a tall fence, which supports 5-¼ inches vertically located crown molding. At the same time, it can also support a 6-½ inches base molding that is set against the machine’s fence. Moreover, the bevel cuts are of top-notch quality. It can cleanly cut through a lumbar dimension of up to 2 x 8 inches at a 45° bevel angle. Oh, and did we mention its miter capacity? Well, it ranges from 0°-50° on both sides!

By now, we are hopeful that you know what you’ll be getting yourself into if you get the DW715. Also, here’s a quick recap of the features that make this tool so unique:

This miter saw comes equipped with a strong and powerful 15 amps motor and a 12″ blade. The high torque motor continuously powers and spins the blade at a lightning 4000 RPM. Hence, this makes the slashing process feel like you’re cutting through butter. Therefore, you won’t have a hard time cutting frames and moldings.

Dewalt left no stones unturned when building this miter saw. As a result, it has been designed to produce proper and more accurate bevel cuts. In addition, at a 45° bevel angle, it can flawlessly slice into lumbar dimensions of up to 2 x 8 inches. Moreover, it can bevel from 0° to 48° to the left side and 0° to 3° to the right.

Keeping personal opinions aside, one of the prime reasons DW715 is an efficient tool is its miter capacity. Most miter saws miter on only one side and up to a minimal range. However, that’s not the case with this one; it has a miter capacity of 0°-50° on both sides! Thus, this makes it very versatile.

Let’s face it: most miter saws are very difficult to carry around and weigh a lot. Luckily, the DeWalt engineers also came up with the solution to tackle this problem too! They have installed built-in handles, which makes it easier for you to transport them. Furthermore, it is one of the lightest on the market, weighing just 42 pounds.

Working with the DeWALT DW715 is pretty easy too! Let’s have a look at how to use this miter saw—

Our article provides a thorough review of the Dewalt DW715 Single-Bevel Compound Miter Saw. We have also added a comparison table to it. However, it doesn’t seem to respond to any of the queries that we receive on a daily basis. Thus, we’ve decided to answer some of them below-

Where are DeWalt tools made?

Currently, there are DeWalt manufacturing plants located in Maryland, Tennessee, Kentucky, and Connecticut. In addition, they also have them in North and South Carolina. Therefore, if we had to narrow it down, DeWalt tool production is strictly USA-based.

Which brand is better: Milwaukee or DeWalt?

Logically, going for Milwaukee would be the best choice if we are talking about 12V tools. At the same time, DeWalt’s new atomic line of tools is much more compact or cheap. Thus, we suggest going for the one which fulfills your specific needs.

Can You Track DeWalt Tools?

Yes, you can. Tracking a DeWalt tool is one of the easiest tasks in the world. All you have to do is link it in the tool connect app, and boom! In addition, you can still track these tools even if their batteries aren’t attached to them.

Should I buy a miter saw or a circular saw?

This solely depends on your line of work. If you’re interested in trim work or building furniture, then a miter saw is your go-to. However, we suggest getting a circular saw if you’re planning on hanging drywall or working with plywood.

Are DeWalt tools worth the money?

The simple answer would be yes, it is. That’s because when you’re buying a DeWalt tool, you’re actually paying for its durability and high-quality build. Therefore, we would definitely suggest DeWalt if you’re looking for something that will last a long time.

All in all, the DW715 is one of the most popular and commonly used tools amongst professionals. The reasons for this are self-evident; the features speak for themselves. Moreover, these features are top-notch when you compare it to the hefty price tag it carries. Therefore, trust us when we say this, this miter saw is going to make your carpentry life more enjoyable.

Nevertheless, we would strongly suggest you go through the DW715 user manual first. Doing so is going to help you understand the machine better and how to use it properly. In addition, the manual also includes safety precautions. Thus, adhering to them will save you from injuring yourself while using them. Although it contains a dust bag, it’s always better to wear goggles to prevent sawdust out of your sight.