When it comes to tasks like cross-cutting or miter cutting, finding a saw that will ensure the smooth application can be challenging. However, thanks to DeWalt- a power tool manufacturer- you no longer have to be concerned about this. Hence, say yes to a variety of different cutting jobs with their new DeWalt DW717 10″ Double-Bevel Sliding Compound Miter-Saw.

Like the entirety of its DeWalt kin, the DW717 retains the highest levels of execution and quality. As a result, having one in your hands will be a treat. It is with our certainty that we can say this saw has lived up to every expectation. But, how did it reach its stardom? Well, we suggest reading on to find out.

We compared the DeWalt DW717 to the Makita LS1019L, to make sure it’s the right tool for you. We decided to go with this one because its features and functions are similar to those of the DW717,. As a result, we recommend that you review this comparison table before drawing any conclusions. 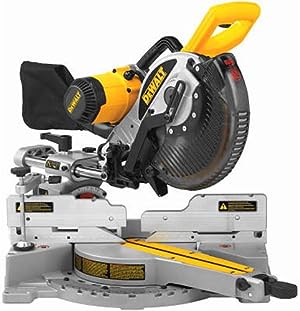 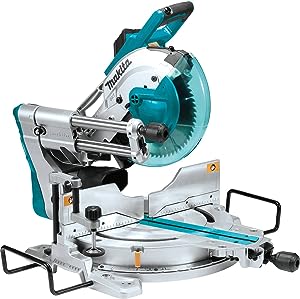 Product
Product
DeWalt DW717 10” Double-Bevel Sliding Compound Miter-Saw
Makita LS1019L 10″ Dual-Bevel Sliding Compound Miter Saw
Speed
Speed
The DW717 is equipped with a 15 amps motor, which drives the blade at a ridiculous speed of 4000 RPM.
Similarly, the LS109L also contains a strong 15-amps motor but it rotates the blade at only 3200 RPM.
Base Molding
Base Molding
It has tall sliding fences which supports up to 6-⅝” of nested crown and 6-½” of base molding vertically.
It has an increased capacity to support up to 6-⅝” of crown molding and only 5-¼” of base molding.
Capacity
Capacity
For versatility, the miter capacity goes up to 60° to the left and 52° to the right.
In contrast, the LS1019L can miter to a maximum of 60° on both sides.
Weight
Weight
The DW717 has a weight of 51lbs, which is relatively light for a compound-miter saw.
Unfortunately, this one falls a little short behind the DW717 as it weighs about 58lbs (57.9lbs)
Bevel Ranges
Bevel Ranges
The saw’s bevel capacity ranges from 0°-48° and has the ability to bevel to both sides.
Identical to its competitor, the LS1019L also has a bevel capacity that ranges between 0°-48° on both sides.
Check Price On Amazon
Check Price On Amazon

If you’re someone who works at multiple construction sites, you have probably already come across the DeWalt DW717 compound miter saw. If you think why the answer is simple: it has a top-notch build quality and is unrivaled in terms of durability. And to make things far better, the machine’s 15 amps high force motor drives the blade at an astounding speed of 4000 RPM!

However, the DW717 isn’t only famous for its durability but also for its cutting accuracy and precision. In fact, it consists of an adjustable stainless steel miter detent plate that includes 11 positive stops. This improves the efficiency of the saw while also ensuring smooth and precise cuts. In addition, the machine also has a unique bevel detent system with seven positive stops, which offers precise and repetitive cuts.

If that wasn’t enough to persuade you, maybe this is. It’s one of the most lightweight compound miter saws on the market! The DW717 is just 51 pounds and comes with a built-in carry handle. Therefore, you can easily transfer it from one job site to another. Not only that, but when it’s time for you to pack up, you can comfortably lift it. What an amazing tool!

By now, we are hopeful that you now understand what this miter saw brings to the table (pun intended). Furthermore, we assume that you are also aware of the risks involved in purchasing the DW717. Regardless, here’s a quick rundown of the key highlights, which makes this machine a fan favorite.

This miter saw contains an incredible and great 15 amp high torque motor. Therefore, this high-power motor ceaselessly powers and turns the cutting blade at an impressive velocity of 4000 RPM! Thus, you will never face any sort of trouble when cutting frames or moldings. In addition, you can also quickly complete miter-cutting or cross-cutting jobs due to this mechanism.

One of the top reasons experts and professionals recommend the DW717 is its cutting capacity and versatility. The machine’s adjustable stainless steel miter detent plate is one of the two culprits behind this. And the other one is the exclusive bevel detent system, which contributes to the saw’s precise and repeated cuts.

More importantly, the engineers also included a cam-miter lock handle, which delivers fast and precise miter angles. That is why this amazing saw has a miter capacity of 60° to the left and 52° to the right. On the other hand, the DW717’s design allows you to make accurate bevel cuts. And its bevel capacity, which ranges from 0°-48° on both sides, makes it suitable for big lumbar jobs.

Having a fence system is one of the most basic features of a miter saw. However, DeWalt has decided to step up its game with the DW717. They introduced a tall fence, which is vertically capable of supporting 6-¼” crown molding. It also supports 6″ base molding that is placed against the fence.

At the same time, the fence can easily slide out of the way when making a bevel cut. But thanks to its sliding saw and dual horizontal steel rails; the machine remains stable and compact. These rails have a creative clamping technique, which increases the machine’s durability.

You can learn more about this product from the video below—

Our article offers an in-depth review of the DeWalt DW717 10″ Double-Bevel Sliding Compound Miter-Saw. However, it doesn’t quite answer any of the questions that we receive through emails and comments. Therefore, we have decided to answer some of them below-

Does the DeWalt DW717 come with a laser system?

-Unfortunately, it doesn’t come with a laser system. However, it is applicable with the DW7187’s laser system, which is sold separately. This can ensure precise cutting as the line is easier to see with a red laser.

Is the DW717 worth your money?

-Keeping personal opinions aside, Investing in the DeWalt DW717 is definitely going to be a smart choice. Moreover, given that it offers more features than one can bargain for, we don’t see any reason not to.

-Yes, DeWalt does make 10″ sliding miter saws. In fact, they are one of the leading manufacturers of these types of saws. That is why the DW717 is one of their most popular products in the carpentry world.

-The feature of a 10″ miter saw, which sets it apart from a 12″ one, is that it rotates faster. Moreover, it’s a cheaper option due to its cutting ability. On the other hand, a 12″ miter saw costs more because its blade is heavier and has teeth.

Overall, we will suggest the DeWalt DW717 compound miter saw to novice artisans and Furniture makers. As a result, it’s a formidable power tool to have on hand. Furthermore, experts and professionals lauded the miter saw’s ability to make precise cuts and portability. And, trust us when we say, this saw will not disappoint you.

Despite everything, we would kindly request you to study the DW717’s user manual first. This is for your welfare because you’ll know how to handle the machine more smartly and efficiently. At the same time, you’ll also be familiar with the safety guidelines so that you don’t incur any unwanted injuries. Lastly, we would like to thank you for bearing with us all this time. Happy shopping!