What Is A Two Stage Air Compressor? – Tips You Should Know In 2022

A two stage air compressor is the one that compresses the air two times before utilizing. The first compression happens when the air is drawn from outside. The first compression air is then reserved into a tank where it gets compressed again & stored in a second tank. In short, you can classify it on the basis of how many times the air gets compressed between the intake valve and the output nozzle. But why does it matter?

So you can clearly tell that the second stage air compressor has more efficiency than the single stage one. That way your machine will have a lot less recovery time. Besides, the compressor will become more capable of handling more air tools at one time. You might be wondering what is the mechanism of this two stage compressor. So let’s have a look at how it works.

What Is A Two Stage Air Compressor (How Does A Work)

After the first compression, the compressor stores the air in the larger cylinder. Then the compressed air goes through a cooler or heat exchanger. In this stage, the air cools down. So that the machine needs less work to compress the air again.

Then, the cycle repeats and the machine compresses the air again. The double compressed air now stored in the smaller cylinder. After that, we get the pressurized air to utilize.

As you noticed, the multi stage or two stage air compressor works on more pressure. So you can use more air tools at a time. Also, it has a faster recovery time due to an increased number of cylinders. You can even achieve a higher CFM in case you’re using the air compressor for impact wrench. 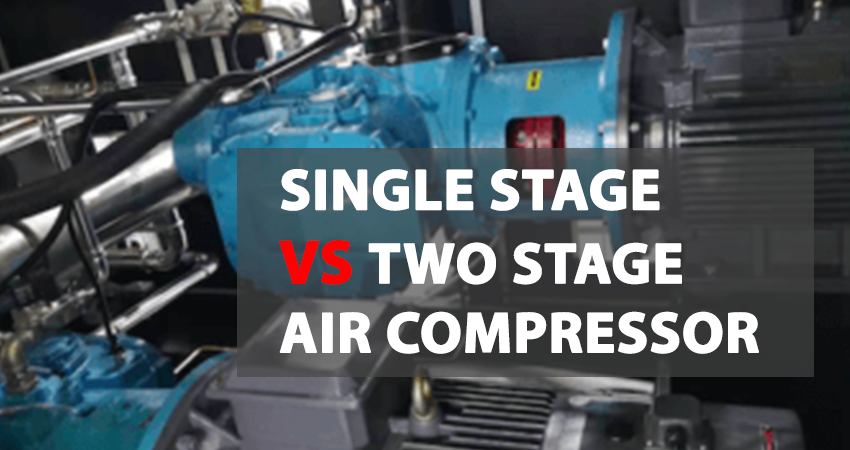 On the other hand, a single stage air compressor saves both power and money. It uses up less energy and the pressure is enough to run the hand tools. They’re cheaper in price too. Although the single stage version doesn’t have an air cooler. So the simpler version stores the hot air in the tank. As a result, its efficiency is less than the former one.

A second stage air compressor, however, yields more efficiency than usual. That is why you can use this for any heavy works. You can even use a second stage compressor at your store to inflate a lot of car tires.

✅ How do I upgrade my air compressor?

Unfortunately, it’s not possible to upgrade a single stage compressor to a multi stage one. Rather it’s wise to get a new one instead of converting it.

✅ How to increase CFM in air compressor?

You can increase the CFM by following some smart tricks like lowering the pressure and adding adjoining another compressor.

✅ How to make an air compressor quiet?

There are quite a few ways to lessen the noise of your air compressor. Check out our previous post on air compressor to learn more.

Overall, both of them have their own significant use. So you should keep the pros and cons of both machines in mind before buying them. That’s all today. Let us know if this post helped you in any way. If you have any questions, don’t forget to put that in the comment section. We will try to answer the questions as soon as possible. Until then, happy working!